The Benefits of Singing in a Foreign Language

Trinity’s new Singing 2018-2021 syllabus has been created to encourage learners to explore as wide a range of songs as possible, allowing them to develop their own musical identity whilst becoming well-rounded and versatile performers, and this includes a wide range of styles and languages. The singing repertoire includes songs in English, Italian, Czech, German, French, Spanish, Welsh, Hungarian and Russian. Professional soloist, consort and opera singer, Vanessa Heine, explains why being able to sing in a range of different languages is a crucial part of developing your own identity as a singer.

Singing for me is about mainly two things: expression and discovery, and learning to sing in different languages is an essential part of that. Whether you’re a young person studying for your Grade 6 exam or someone who’s been singing professionally your whole life, the one thing you don’t want to do is limit yourself. When singing only in English, you’re cutting yourself off from the wealth of repertoire available to you. The voice as an instrument is so incredibly versatile and individual that every opportunity to try something new should be encouraged. Part of the joy of being a professional singer is the variety of things I get to try and the discoveries that I still make in my own voice and artistry are endless. Language will always be a major part of my journey as a singer.

When I first started my vocal training, my favourite languages to sing in were German and French. However, I’m a big believer in venturing outside my comfort zone as often as possible, and over the years I’ve been fortunate enough to sing in Latin, Italian, Russian, Czech, Polish, Hebrew, Spanish, Welsh and various made-up languages, including pretend Aramaic! What I learned quickly is that each language comes with its own set of technical challenges and benefits. When singing in Italian, for example, you have to contend with sometimes up to four different vowels on one note. With Russian, it can be the opposite where you have to get through a cluster of consonants before you even get to a vowel. French often has feminine endings that composers are fond of placing on stressed syllables and you have to find ways of balancing that. In English, you often have to sing several bars on one very nondescript vowel without it sounding odd. All of these things keep you nimble – they make your tongue and lips have to work quickly and efficiently and force your brain to engage. There’s literally nowhere to hide and it’s in equal parts terrifying and thrilling.

The other thrilling aspect of singing in a new language is discovering just how many different vocal colours we have at our disposal. We can express the whole breadth of human emotion simply by accessing that colour palette and every language I’ve sung in has taught me something new. Whether it be just how far back in the throat a German or Russian glottal sound needs to go or just how pursed the lips need to be to sound and look French (a wonderful French coach I worked with used to talk about our “French face”). As I learned about the depth and breadth of all these colours, I learned about my own vocal potential. And through that I discovered how to convey the whole gamut of emotions, ranging from playfulness to deep anguish. Being able to express these things is one of the great joys of being a singer.

The best way to improve as a singer and musician is by constantly trying new things and new repertoire. I can’t conceive of being limited to just one language any more than being limited to a one octave range. The sense of accomplishment I feel when I really master a song in a difficult language is honestly worth the effort. Russian is my current bête noir – simply due to my unfamiliarity with the alphabet, grammar and various inflections, proving it to be harder to learn and memorise – and getting to grips with it is both challenging and rewarding. But most importantly it’s giving me the courage to explore the glorious bounty of music that’s available to us. 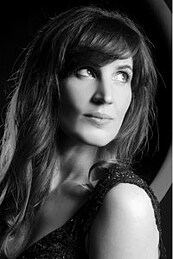 Vanessa Heine is a mezzo soprano who works in London as a soloist, consort and opera singer. As a consort singer, she regularly performs with the BBC Singers, Philharmonia Voices, Metro Voices and London Voices. It is in this capacity that she has had opportunity to work with some of the world’s leading conductors such as Daniel Barenboim, Sir Colin Davies, Vladimir Jurowski and Esa-Pekka Salonen. She regularly sings on recordings for Opera Rara and in the extra chorus at ENO. Recent operatic roles include the title role in Carmen and soloist in the world premiere for Stockhausen’s Mittwoch aus Licht. Vanessa has also appeared on numerous film soundtracks such as The Hobbit, Alice in Wonderland, and Pirates of the Caribbean franchises.