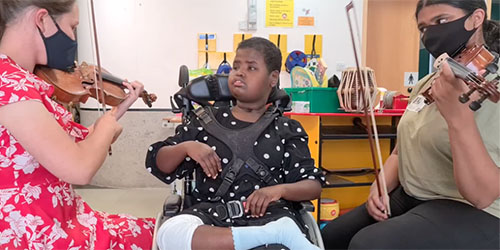 Established by the University of Roehampton, the UCL Institute of Education and the Royal National Institute of Blind People 2002 and based on more that 20 years of research, Sounds of Intent aims to investigate and promote the musical development of children, young people and adults with learning difficulties.

Sounds of Intent has also been included as a recommended resource in the much anticipated ‘The power of music to change lives: a national plan for music education’, published by the UK government’s Department for Education and the Department for Digital, Culture, Media & Sport in in June 2022.

Freely available to anyone who wishes to use it, the Sounds of Intent framework is designed to recognise how everyone engages with music, from children in the early years to older people with dementia, from those with profound learning difficulties who are still learning to process sound, to others on the autism spectrum who are regarded as advanced musicians.

Awards and Certificates in Musical Development

Trinity has now created a set of fully regulated qualifications which recognise learners’ musical achievements at Sounds of Intent Levels 2–6. Qualifications range from Entry Level 1 through to Level 3, with Level 3 carrying UCAS points.

These ground-breaking, fully accessible regulated music qualifications are open to all learners, enabling them to have even the smallest steps in musical progression formally recognised.

The Awards and Certificates in Musical Development have been designed for any music setting: for learners working individually, in the classroom or any other music-making context. Each learner’s musical achievements can be recognised through any type of music-making activity.

Learners are assessed through a process of ongoing observation within regular opportunities to engage in musical activities.

Adam Ockelford, Professor of Music at the University of Roehampton, and founder of Sounds of Intent, is excited about the new venture. “I'm thrilled about the new initiative by Trinity College London, which will mean that, for the first time, all children and young people, no matter what their abilities or needs, will be able to have their musical achievements formally recognised.”

Francesca Christmas, Director of Music at Trinity College London says, “Musical learning is a fundamental right for all in education. Therefore, the opportunity for children and young people’s music-making to be celebrated through formal recognition, which can be key to unlocking life-changing funding and support, should also be universally available. Trinity is delighted to be working alongside schools, teachers, and other organisations to make this possible through the Sounds of Intent Framework of Musical Development.”

Available from September 2022, these qualifications are now open to any UK school or other organisation that works with learners with special educational needs, additional support needs or disabilities. Organisations can register as a validated course and assessment provider to deliver the assessment of young people’s musical engagement against Trinity’s Awards and Certificates in Musical Development.

If you would like further information please visit trinitycollege.com/sounds-of-intent.